ALLIANCE, La. (AP) - The oil industry has left a big footprint along the Gulf Coast, where a Delaware-sized stretch of Louisiana has disappeared. But few politicians would blame Big Oil for ecosystem abuse in a state where the industry employs up to 300,000 people and injects $73 billion into the economy. 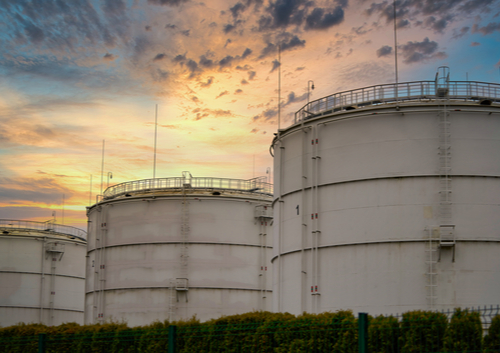 Down in the pancake-flat bayou, it's not easy to see what made so much of the coast sink into the Gulf of Mexico.

Even when you climb onto the levee, buzzing with dragonflies, that keeps the old delta farming community of Alliance from being swallowed, all that's visible is marshland, stretching toward a green horizon.

But land's end is much closer now, and what remains has been disrupted. Access canals carved by the oil industry run straight as arrows, rusting signs warn of underwater pipelines and abandoned drilling platforms sink into the muck. As the Alliance refinery billows with fumes, the surrounding pastures are slowly sinking.

Louisiana remains the nation's second-largest crude oil producer and oil refiner after Texas, but the industry has been on the defensive since Edwards, a 49-year-old lawyer and Democrat, ended eight years of Republican leadership last November.

Publicly, he joined a campaign by local governments suing to hold the industry at least partly responsible for Louisiana's loss of 1,900 square miles of coast since the 1930s. Privately, he pushed for a pre-trial settlement to resolve all their claims.

"Our coast is in crisis," Edwards wrote in a letter to oil executives after their initial meeting in May, calling for an "amicable solution" to avoid years of litigation.

He was soon seconded by New Orleans Mayor Mitch Landrieu, whose family of Louisiana Democrats long supported Big Oil. Landrieu accused former state leaders of allowing the industry to cripple "in a generation or two what Mother Nature built in 7,000 years," and said the damage has spread "through the marsh like an infection.

"It's absolutely new," pollster Bernie Pinsonat said. "The oil companies are taking it seriously because you're talking about billions and billions of dollars."

This political shift can be traced to Hurricane Katrina, which shocked the nation and exposed the dire state of ecology in the Mississippi River's delta. Katrina alone tore up about 60 square miles of marsh around New Orleans in 2005.

At issue are oilfields like the one in Alliance, in Plaquemines Parish, where oil companies are accused of routinely abandoning open waste pits, carelessly dumping toxic brine and oilfield waste onto the marsh, and interrupting the delta's ebbs and flows by dredging thousands of miles of canals that weren't filled back in.

The oil industry blames the Army Corps of Engineers, whose levees deny the delta its natural deposits of silt and sand while channeling the Mississippi River out to sea. It also blames the clear-cutting of coastal forests more than a century ago, shipping channels that have sliced up the delta, and even the invasive nutria, an oversized marsh grass-eating rodent.

"It's just such a vague attempt by the plaintiffs to throw a blanket over an entire industry and hold it singularly responsible for a problem that's got multiple causes," said Robert Meadows, a Chevron lawyer.

The legal case requires analyzing thousands of coastal drilling permits and oil leases, putting prices on the unmitigated damage caused by each company, and then dueling over demands for compensation.

Scientists generally agree that between 30 percent and 40 percent of wetlands loss is attributable to drilling and its associated activities, said John Day, a Louisiana State University scientist and expert on the delta's problems.

"The factual basis is terribly strong: If I were a plaintiffs' counsel, I'd put on a five-day slide show narrated by geologists and hydrologists and wetlands scientists, and it would be devastating," said Oliver Houck, an environmental law professor at Tulane University in New Orleans.

Geologist Sherwood Gagliano, who has studied the coastal crisis since the 1960s, contends that extracting millions of barrels of oil and gas from below the surface has caused vast swaths of the coast to sink.

"It's like an Atlantis oilfield," Gagliano said. "There are well-heads sticking out of the water. Abandoned production platforms are now completely submerged. Oilfields developed on land are now under 5 or 10 feet of water. And that is happening all the way across the coast."

But F. Rivers LeLong Jr. calls the lawsuits a hypocritical "shakedown cruise" by the same governments that have long profited from drilling.

"They aren't the good guys any more than the oil companies were," said LeLong, whose father started the Kenmore Oil Co., which is named as a defendant because it worked the Alliance field before going out of business in 1973. "To act as though they were victims in the process is a fairly laughable characterization."

What's gone is gone, but the politicians hope to keep hundreds of other square miles from disappearing. They're envisioning huge projects to divert sediment flows from the Mississippi River and build up marsh flats, barrier islands, ridges, and swamp forests.

It would cost between $50 billion and $100 billion, and Louisiana doesn't expect to have more than $25 billion to spend.

Suing oil companies "is probably the only new potential source of revenue," said Mark Davis, who directs Tulane University's Institute on Water Resources Law and Policy. "Before you tax anybody, you're going to be required, I think, to show that you've tried every other alternative. Is there anybody who owes dollars that have not been collected for this purpose?"

Originally reported by Cain Burdeau of the Associated Press on August 5, 2016.